Hugh Falconer was the first person to describe a dwarf elephant (150 years ago, in 1862). He was pretty terrible at publishing however, and this is making my work on sorting out the messy state of Sicilian and Maltese dwarf elephant taxonomy rather tricky.

After his death, his friends turned his notes and letters into a book as a way to make up for his lack of lifetime publication. It ran to two thick volumes! There must have been a huge pile of papers and notebooks – but the originals seems to be lost. I went to the Falconer Museum in Forres to see if anything was hiding in the archives.

Forres, by the way, is better known for its association with Shakespeare’s Macbeth: Duncan’s castle was in Forres, and the three witches toiled and troubled thereabouts. Judging by the witches stone on my walk to the museum, they’d have met a sorry end had the locals got hold of them.

Witches Stone, Forres. Inscription reads: ‘From Cluny Hill witches were rolled in stout barrels through which spikes were driven. Where the barrel stopped they were burned with their mangled contents. This stone marks the spot of one such burning.’ Nice.

I didn’t find the note books, but I did get to see some other rather wonderful things that really brought Hugh F to life for me, in all his larger-than-life glory. He sounded like he was a lot of fun, rather infuriating at times, but loyal and loving (if a little unreliable!)…

If anyone has any thoughts as to the whereabouts of Hugh’s notes, do let me know. I’ve checked with the archives of George Busk (his great friend) and Charles Murchison (who edited the Memoirs and Notes of HF), and looked in the NHM archives. I’ve also asked at Edinburgh and Aberdeen university, and the Linnean Society. Some letters survive in the Darwin archive (they are very poignant… poor Hugh seems to have waited in rather wistfully for Charles D to visit, only to be continually disappointed), but otherwise I’m at a dead-end.

Anyway – a few treats from Hugh Falconer’s archive, courtesy of the Falconer Museum in Forres (which you should visit if ever you’re in Scotland). All photos are (c) Forres Museum.

HF survives an incident at the Geological Society, thanks to his hat. Letter to his niece Grace.

HF identifies with a hippopotamus. 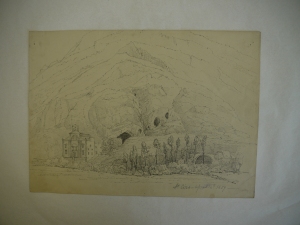