Thank you everybody who has tweeted and emailed to say that you enjoyed Walking Through Time: Scotland’s Lost Asteroid. I am so glad!

Where did you get your cardigan?

By far and away the most common question! I bought it on holiday in Iceland a couple of years ago. It is my favourite cardigan. It has magical norse properties, being both warm in winter yet amazingly breathable in summer. It can also withstand being worn for five consecutive days of 12+ hours of filming, yomping over hills and knochans in the blazing sun, without getting smelly (apart from its own lovely sheepy scent).

Sadly it now has a hole in the elbow. I am devastated as I don’t know if I will be able to fix it. But I will try to source some of the same wool to darn it (anyone going to Iceland?).

What is in your back pack? 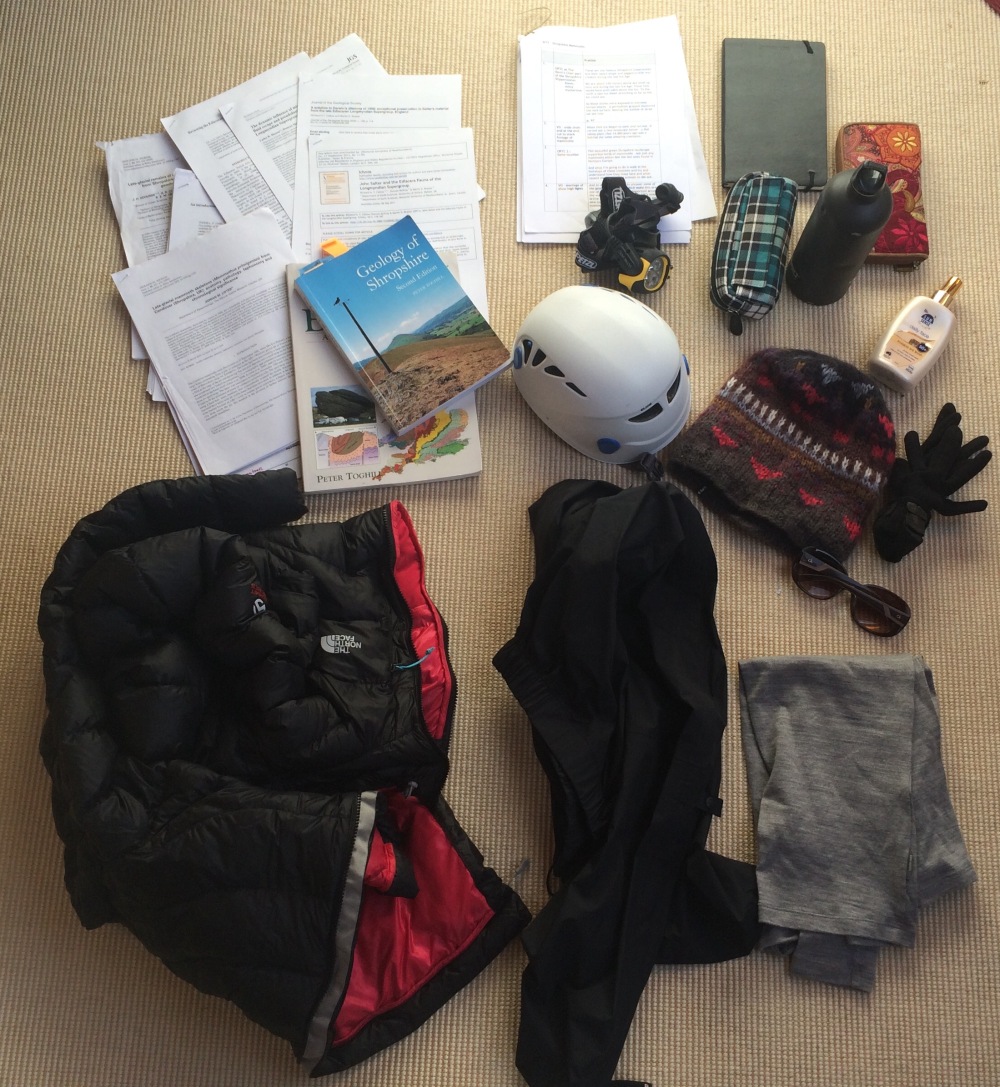 Typical contents of my Walking Through Time back pack!

Shockingly, some of you think I had a back pack stuffed with newspaper! I have heard tales of outdoorsy presenters filling their bags with bubblewrap, but my back pack was actually in actual, proper use. We were out all day, and had to walk quite long distances, so had to be prepared in the same way you would on a hike. And anyway, nothing looks more rubbish than an unweighted back pack!

For each episode, my back pack had in it:

Where was Scotland 1.2 billion years ago? And what was it like? 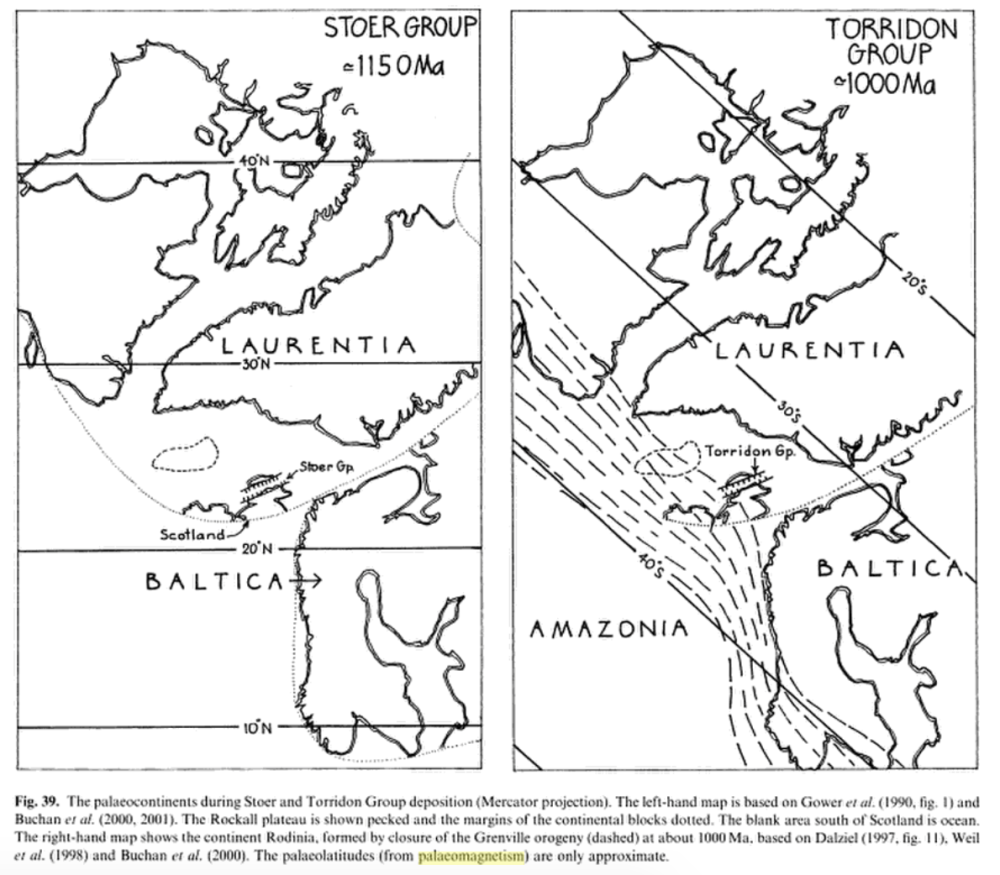 From Stewart, A.D. (2002(. The Later Proterozoic Torridonian Rocks of Scotland: Their Sedimentology, Geochemistry and Origin

The best person to turn to for this answer has to be the father of Torridonian geology, Sandy Stewart. The figure, borrowed from his book, shows the location of what is now Scotland at 1.2 billion (when the Stac Fada member was laid down, forcing its way between the sands of the ‘Stoer Group’ of Torridonian sandstones), and then at 1 billion years ago (which is when the bulk of the Torridonian sandstones — the ones that mountains like Stac Pollaidh are made of — began to be deposited).

1.2 billion years ago, the Assynt region of Scotland was on the edge of the ancient continent known as Laurentia, at a latitude of around 25ºN. The sea was maybe a few hundred kilometres away. The climate was probably equivalent to a subtropical steppe — nice and warm, not too wet but not too dry either! The earlier Stoer deposits were lain down by rivers, so imagine a huge river system perhaps, flowing towards the west. But, and this is, key — there is no terrestrial life. No plants fringing these rivers, and certainly no animals swimming with them, or moving beside them. I fact, imagine a river flowing on Mars (but with a subtropical climate!), and you’d be close.

Later on, after the impact (and perhaps because of the impact), the drainage shifted and a lake formed. So tranquil waters in a quiet world, undisturbed by the call of a bird, or the chirrup of an insect, or even by the sound of the wind in the trees. Empty and still.

I think I have found a meteorite, what do I do?

If you have found a possible meteorite (how exciting), the best thing to do is to take it to your local museum and ask them if they can help to confirm your discovery. Or you can ask experts at the Natural History Museum in London by using the online identification forum NaturePlus. You’ll need to take a picture (make sure you include a scale to show its size — a coin or a pen will do, if you don’t have a ruler handy), and also include as much information as you can about where you found it, and when.

Can you identify a rock, or a geological section for me?

I am afraid not — unless you have found an elephant fossil, then I am your woman! As with putative meteorites, the best thing to do is to take it to your local museum and ask them if they can help to identify what you have found. Or join the online identification forum run by the Natural History Museum: NaturePlus. You’ll need to take a picture (make sure you include a scale to show its size — a coin or a pen will do, if you don’t have a ruler handy), and also include as much information as you can about where you found it, and when.

You can also download the new Natural History Museum Fossil Explorer App, which allows you to find out about the geology in your area and also provides guides to most commonly found fossils! This is a useful first step to understanding the rocks and fossils under your feet.

If you want to get into more detail, join the Geologists Association. They run field trips, and have a brilliant magazine. They also produce the brilliant RockWatch magazine for younger members.

Where was that spectacular fishing spot in Assynt?

I couldn’t possibly divulge the location of Stewart’s secret fishing spots 😉 But if you want a guide, he can be contacted here  https://www.facebook.com/assyntflyfishing/

Will there be a DVD of the series?