**UPDATE: you can now listen to the programme online here**

The BBC have very wisely decided to make a programme all about one of my favourite scientists, Dorothea Bate. It’s only 15 minutes long, mind, which means it can only scrape the surface. But I get to wax lyrical about her, and how she has directly influenced my work, and how I’ve been able to follow in her footsteps – literally. And even better, her biographer Karolyn Shindler, is involved so the historical content should be top notch.

Pouring over Dorothea Bate’s maps and diaries from her expedition to Crete in 1904. These are now stored in the Natural History Museum’s archives. Clockwise from bottom right: me, Adrian Lister, David Richards, Kirsty Penkman

It’s on at 13:45 on the 30th September on Radio 4, and is one of the 10 programmes in the Natural History Heroes series running on BBC Radio 4 from the 28th September. **UPDATE: Listen online & read more about the programme here** 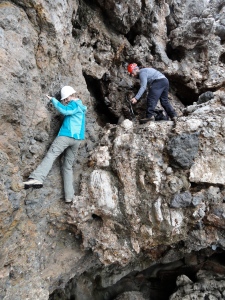 In the meantime, here is a short youtube video about my research on the world’s smallest mammoth here (with nice shots of the fossils and the ‘beastly hot’ trip to Cape Maleka):

And here are two posts I wrote about Dorothea Bate for TrowelBlazers:

The Dynamite Discoveries of Dorothea Bate — yes, she really did use dynamite. I wish she had used less.

Dorothea Bate & the Star(key) of Bethlehem — Dorothea’s excavations in Bethlehem in the 1930s, and how she was royally screwed over (technical term) by James Starkey.

But really, the best place to start for a proper Dorothea Bate-fest is with Karolyn Shindler’s excellent biography Discovering Dorothea. Criminally it is out of print, but you can still buy a second hand copy. PUBLISHERS!  It is time for an updated edition!

Natural History Heroes: Dorothea Bate will be broadcast at 13:45 on the 30th September on BBC Radio 4. Details here

A quick round-up of the last two-and-a-bit weeks of Mammoth Media Madness, where on more than one occasion I found myself thinking ‘What would Peeta Mellark do…?’

It all started with Woolly Mammoth: the Autopsy…

The Daily Mail, the Independent and the Guardian all thought you should watch Woolly Mammoth: The Autopsy on Channel 4, Sunday 23rd November 2014

Which led to an early morning trip to Media City in Salford, to talk mammoth blood on the BBC Breakfast sofa (and they squeezed a cheeky Radio 5 Live segment in on the way up the stairs too!). There was a whole plate of pastries for breakfast but neither I, nor the teachers who were divided about the controversial issue of whether kids should give their teachers christmas presents, wanted to eat them. 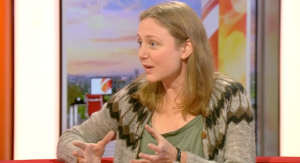 On the BBC Breakfast sofa, wearing my apple-scratting, cider-making clothes (all I had with me that weekend…)

And then I wrote about the ethics of mammoth cloning for The Guardian’s Comment is Free [more here], which prompted a lot of other journalistic pieces, with comments from me.  Too many to link to. 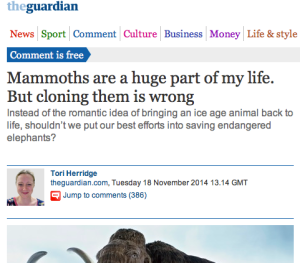 This was followed by an invite to go on BBC Radio 4’s Saturday Live. I said ‘Yes, please!’ [listen here]

No one wants to eat the Saturday Live pastries either… From left to right: John Carder Bush, Rebecca Root, Carrie Grant, and me.

Then Russell Howard’s Good News got in touch. I was terrified, but thought what the heck. They uncovered my #RealorAuel secret, and it all got a bit cheeky, but it was great fun. Russell Howard is a very generous comedian, who let me take the mickey out of him as much as the other way round. [available here in the UK until 01:30, Thurs 11th Dec. Rest of the world, this link should work for you]

Plus they give you flowers!

And then I got flown to New York for an interview on CBS This Morning to promote the Smithsonian Channel version of #mammothautopsy How to Clone a Woolly Mammoth.

I got picked up in a limousine…

One of four limo trips through NYC. Must say BBC Breakfast didn’t stretch (*groan*) to this 😉

And the CBS This Morning green room had a pretty fancy breakfast spread… But what is it with breakfast TV and pastries? Who on earth wants to go live on national TV with pastry crumbs down their front or stuck to their lipgloss?

CBS This Morning puts on a good breakfast spread. Nobody wants to eat the pastries, again.

American production values made me look very [lip]glossy. I’m glad I wore my fave cider-making cardy again to make sure a bit of the real me made it on-air. Plus, breakfast is a cosy cardigan kind of time.

You can watch the CBS This Morning interview here: http://www.cbsnews.com/common/video/cbsnews_video.swf 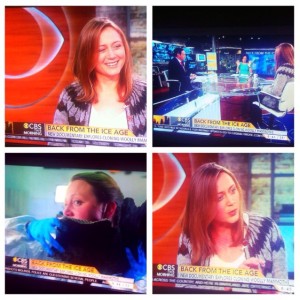 Thanks dear chum Anna Zecharia for getting her entire US family up early on the day after Thanksgiving to record this for posterity!

I also got to meet up with my Team TrowelBlazers buddy Suzie Birch in NYC after the interview, so that was a bonus!

Suzie Birch and I catching up in Central Park, NYC. Nice selfie work there, Suzie!

And the icing on the ridiculous cake? I made it into Grazia’s Chart of Lust. One below Morrissey. Oh Yes.

Number 7 on Grazia’s Chart of Lust. Surely life is downhill from here? Thanks Nicola Hembrey for the pic!

It’s been a ridiculous whirlwind of a time. Exhausting and hilarious. Hopefully informative on the science front to all who paid attention, and didn’t get totally sick of me.

—
Postscript: one of the things that freaked me out about all this TV was having no idea about the practicalities of what’s involved in different settings: the studio set-up, what to wear, what to bring with me etc. For example, I don’t normally wear make up except for special occasions, but I’m vain/self-conscious enough to not want to look crap on the telly, so should I arrive with my make up done? Or bring it with me?

Here’s some knowledge I’ve gleaned that may be useful to others in the same situation:

1. I had to sort myself out hair/make-up/clothes-wise on #mammothautopsy. This meant I got stuck wearing the same boiling hot outfit for a week (for continuity) as we launched into the autopsy and filming earlier than I expected. I had my hair up, fortunately, so that wasn’t flopping around everywhere. But I don’t recommend a hand wash-only cardigan as suitable mammoth autopsy attire… Or necklaces.

2. If you go to a TV studio, they will do your make up and hair for you so you really don’t have to worry. This is very important for morning tv when you don’t really want to be arsed getting up even earlier than you have to and then have an eyeliner crisis or whatever. How much make up they put on you varies, though, so I imagine having some idea of what you want to look like might help. If I’d been braver, I might have asked for a leetle less of the slap on Russell Howard. Though as it just brought me in line with Russell — yes blokes, you’ll be getting the treatment too, as Steve says below — I suppose it was  beauty-base zero, as they say in the Capitol. The CBS ladies were the best, as they sized me up and realised I wasn’t a make-up person, so kept it minimal. BBC Breakfast kept it minimal too, but I think that was mostly because we had literally 30 secs to get ready and the make-up artist was also busy eating a pastry with one hand. Still, at least someone’s eating those pastries 😉

3. Food. They will promise to feed you, but for breakfast TV & radio it will be pastries. And there won’t be any plates (I sound like my mum!). Fine for radio, but these have to be the worst food EVAH for a pre-broadcast snack as they’re so messy. I’d make sure you have breakfast first, if you aren’t too nervous.

4. Clothes. Apparently blue and green are frowned upon by RHGN (and any green-screen setting too), which was a disaster for me as that is basically my entire wardrobe (apart from Scandinavian knits..). Also crazy patterns, stripes and checks cause strobing issues. I had to dash out at lunch and buy a not-very-expensive red top from Zara. I recommend Icelandic cardigans wherever possible, except at mammoth autopsies.

5. It helps, I’ve found (also when doing live events), to wear something with a waistband that they can attach the mic battery pack easily. So skirt/trousers/dress with a belt. Otherwise you might find yourself fiddling with the waistband of your tights in fairly public settings…

I should also add that all of the producers I dealt with were super-nice, and super-kind. Thanks especially to Trudy Scanlon at BBC Breakfast and Ben Michaels at Russell Howard’s Good News for dealing patiently with all of my questions and being all-round good eggs. I even forgive you for the Mammoth Hunters excerpts, Ben — reading the books to find the juicy bits is punishment enough!

While baby mammoth Lyuba was being unwrapped at the Natural History Museum by my boss Adrian Lister, I was at Broadcasting House for Start the Week, to discuss the thorny subject of Alien Invaders. Not the out of space kind but the movement of animals across the globe, and the emotional subject of the value of native vs non-native species.

You can listen to the programme here.

On the programme with me were: Ken Thompson, whose new book Where do Camels Belong? addresses these issues head-on; Monique Simmons from Kew, an organisation tasked with minimising the UK’s risk from invasive plant species; and John Lewis-Stempel, whose new book The Private Life of an English Field mourns the loss of traditional farming methods — and a number of well-loved, if non-native species alongside. I gave a palaeontological perspective to the discussion. Plus a preview of Mammoths: Ice Age Giants! and some bonus dwarf mammoths.

I never really felt the discussion really took off – but it was fun nonetheless. In particular I felt that Ken (on the program and in his book) was a little bit naughty in shifting effortlessly between the idea of ‘non-native’ species and ‘invasive’ species. I agree that the idea of a ‘native’ British fauna is highly problematic, but it isn’t really fair to paint conservationists as idealogical zealots here: the species they most worry about are the invasive ones. The ones that swamp out all others, reducing local biodiversity and often causing other species to go extinct.

And yes, while species distributions change through time making the idea of a natural baseline highly era-specific, once you accept that maybe ‘natural’ isn’t the be-all and end all it is time for a more challenging discussion: what is it that we value about our environment and the species around us? What kind of world do we want to leave behind?

There aren’t any easy answers to that, but I suspect the answer isn’t throwing up our hands and doing nothing at all.

Ken’s book is really a long-form version of this paper by Mark Davis et al [££] from 2011, which he was a co-author on. It generated quite a number of responses from ecologists at the time: see this letter by Dan Simberloff [co-signed by 141 other scientists; ££]. If you have access to Nature, they are both well worth a read, as are the references they cite!